Dr. Mayra Cuéllar-Cruz is a graduate in Chemistry from the Autonomous University of the State of Hidalgo. MSc is in Sciences, specialized in Biochemistry by the CINVESTAV (the Center for Research and Advanced Studies of the National Polytechnic Institute – Centro de Investigaciones y Estudios Avanzados del Instituto Politécnico Nacional). PhD in Chemistry with specialty in Molecular Biology from the IPICyT (Potosi Institute of Scientific and Technological Investigation – Instituto Potosino de Investigación Científica y Tecnológica, Mexico) since 2009.  She is currently a faculty and Researcher at the University of Guanajuato. Member of the National System of Researchers level 2 (SNI – Sistema Nacional de Investigadores).  Currently, she is Topic Editor for the CRYSTALS Journal of the MDPI (Switzerland) and scientific reviewer for various important indexed journals.

Dr. Cuéllar-Cruz is an expert in the development of vaccines and is currently working on a vaccine against the opportunistic human pathogen fungus Candida.  She has developed various research lines, these are oxidative stress, biofilms. She is a pioneer in the identification of dual function and location of proteins, and in the formation of nanocrystals of various species of Candida. She has also begun a research into the chemical origin of life. She has used various radiation synchrotron techniques in her research. Dr. Cuéllar- Cruz has published more than 50 research papers in indexed journals with strict review. She has written chapters of books and registered few patents related to biomedical applications and crystal growth methods.  She has supervised a total of 14 undergraduate theses, 8 Master’s, and 2 doctorates.  Her teaching activities include undergraduate courses in Biology, Chemistry, Pharmaceutical Chemical Biology, and postgraduate teaching in Biology (Master’s and Doctorate level).  Dr. Cuéllar-Cruz is the founder and current President of the Mexican Society of Synchrotron Light, A.C.  She served as General Coordinator of the Theme Network of Users of Synchrotron Light (REDTULS) of CONACyT.  Currently she is also the vicePresident of the Mexican Society of Crystallography, A.C. 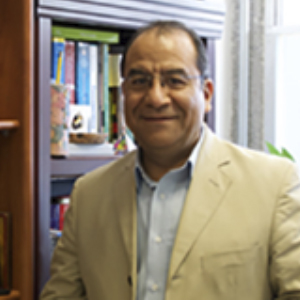 Doctor Moreno is a Full Professor of Biological and Physical Chemistry; he was the Chair of the Lectures on Physical Chemistry for Biomedical Sciences (1997-2002), and from 2010 he is the Chair of the Course: Equilibrium and Kinetics in the undergraduate level at the Faculty of Chemistry UNAM. He was habilitated to supervise students into the PhD Graduate Programs in Biomedical, Biological, Chemical and Materials Sciences since 2000.

Dr. Abel Moreno has published more than 108 papers in prestigious international journals cited 2300 times having a H-index of 25. He is the author of 15 book chapters and 7 books on his specialties in Biological Crystallogenesis, Crystallochemistry, and Biomineralization processes. Into the Academia he has graduated more than 30 students at all levels from BSc up to the PhDs and postdoctoral fellows. Prof. Moreno was the former President of the International Organization for the Biological Crystallization from September 2010 to September 2012 (IOBCr). He is also member of the international advisory board of the Commission of Crystal Growth and Characterization of Materials of the International Union of Crystallography, member of the Executive Committee of the International Organization for Crystal Growth (2019-2022). Prof. Moreno was the President of the Mexican Society of Crystallography from 2018–2019, he is currently the vice-President of Mexican Society of Synchrotron Light from 2019-2023. He is also member of the Advisory board of the Latin America Asia Africa and Middle East Program (LAAAMP) of the IUCr–UNESCO–IUPAP. Prof. Moreno is member of the Editorial Board of the journal Progress in Crystal Growth and Characterization of Materials (ELSEVIER), Editor for the Latin America section of the newsletter of the International Union of Crystallography and Editor-in-Chief of the section Biomolecular Crystals of the journal Crystals (MDPI, Switzerland). 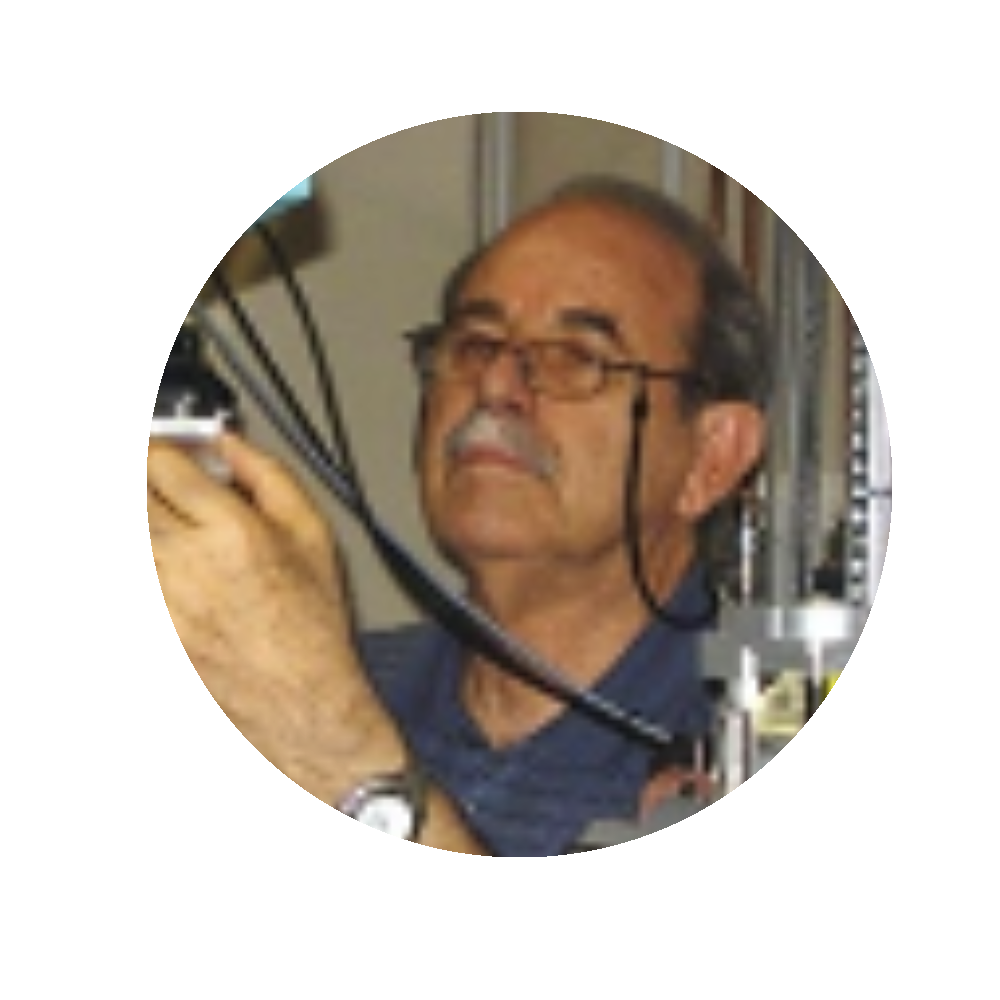 Luis E. Fuentes-Cobas obtained his bachelor’s, master’s, and doctorate in solid state physics from the University of Havana (UH, Cuba). He developed a post-doc on neutronographic texture analysis at the Joint Institute for Nuclear Research Dubna (Russia). In Cuba, he worked at the Faculty of Physics (UH) and at the Academy of Sciences. In Mexico, he is a Senior Researcher at the Advanced Materials Research (CIMAV, Chihuahua).

The academic interest of Dr. Fuentes-Cobas has been focused on the teaching and research of electromagnetism, the structural analysis of materials by means of synchrotron light and the structure-properties relationship in functional solids.

His CIMAV Crystallography Group (mainly graduate students) has solved with synchrotron light the crystal structures of various piezoelectrics and multiferroics, created computer programs for the interpretation via modeling of two-dimensional diffractometric data and contributed novel algorithms for the prediction of the elasto-electro-magnetic properties of textured polycrystals.

Dr. Fuentes-Cobas is coordinator of the international project “Material Properties Open Database (MPOD)”, associated with the open database http://mpod.cimav.edu.mx, and of the scientific education project “Materials World Modules-México” http://mwm.cimav.edu.mx. He is the author or co-author of 150 articles and 7 books, has directed 40 graduate theses. He has received scientific awards in Russia and in Cuba. In 2012 he received the Chihuahua State Prize for Science, Technology and Innovation. 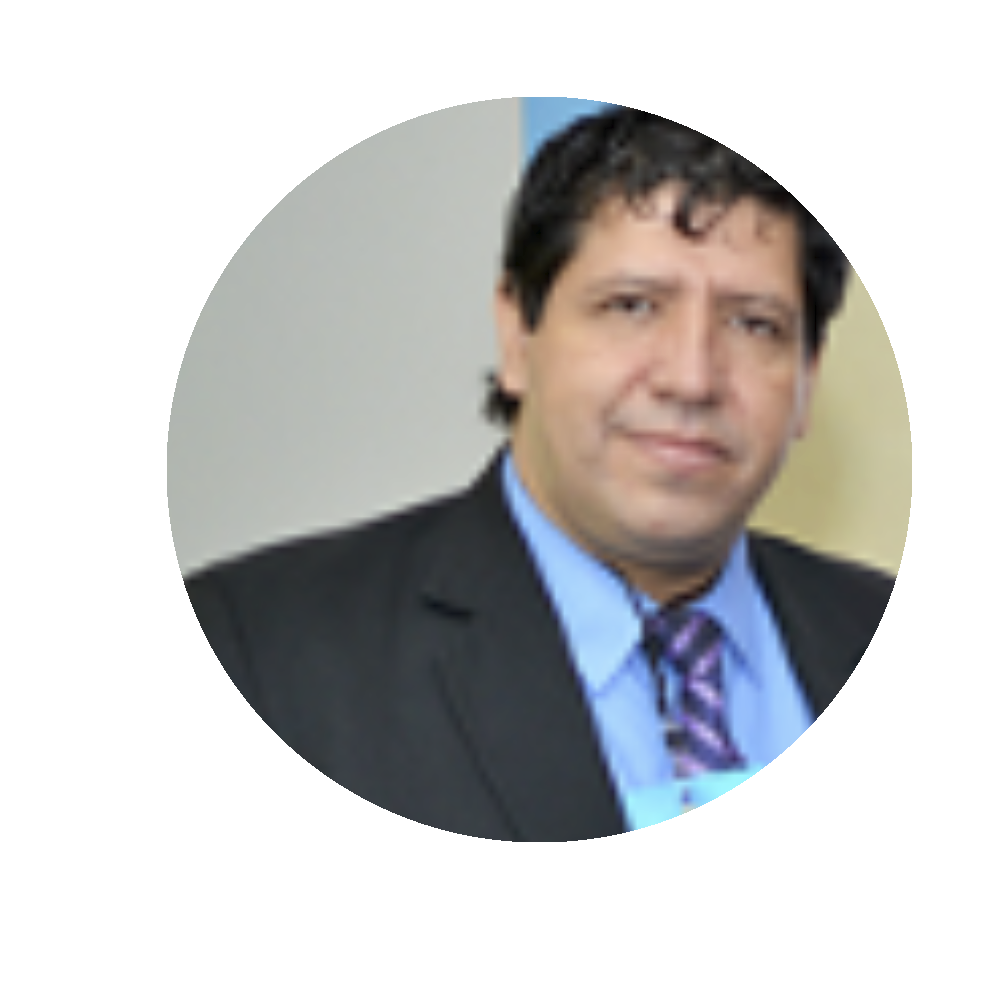 Dr. Gustavo Cruz Jiménez obtained a degree in Chemical Pharmacy at the School of Chemistry in the University of Guanajuato and a Master’s Degree in Chemical Sciences with a specialty in Analytical Chemistry at the Institute of Scientific Research (IIC) of the University of Guanajuato. He obtained a Doctorate in Environmental Science and Engineering from the University of Texas at El Paso, US. Dr. Cruz’s research focuses on the application of analytical techniques to determine different pollutants in the environment (air, soil, water) and their possible toxic effect on plants, animals and humans (Environmental Toxicology).

On the other hand, he studies possible native plants in the State of Guanajuato for their possible use in the management and control of contaminants (phytoremediation). In addition, he conducts chemical speciation studies of potentially toxic elements using synchrotron radiation techniques, mainly X-ray Absorption Spectroscopy.

He is currently a full-time professor in the Department of Pharmacy of the Division of Natural and Exact Sciences (DCNE), Campus Guanajuato at the University of Guanajuato and he is responsible for the Laboratory for Toxicological and Environmental Risk Assessment (LETRA) located at DCNE . Since he has been working at DCNE, he has held various positions: Head of the Pharmacy Department (2006-2008), Coordinator of the Environmental Management System of the School of Chemistry (2006-2011), Director of the Pharmacy Department (2012-2016) and is currently Professor Head Representative of the DCNE before the General University Council, the highest governing entity of the University of Guanajuato. On the other hand, he is the General Coordinator of the Thematic Network of Synchrotron Light Users (RedTULS-CONACYT) and he is a founding member and treasurer of the Mexican Society of Synchrotron Lightsource (SMLS).

He is a professor recognized by the Secretariat of Education as a professor with a desirable PRODEP profile with “Preferred” quality and he is a member of the National System of Researchers (SNI), Level I. He has published above twenty research papers on international peer review journals. In addition, he has directed four PhD theses, five master’s  degree theses and above twenty undergraduate theses. 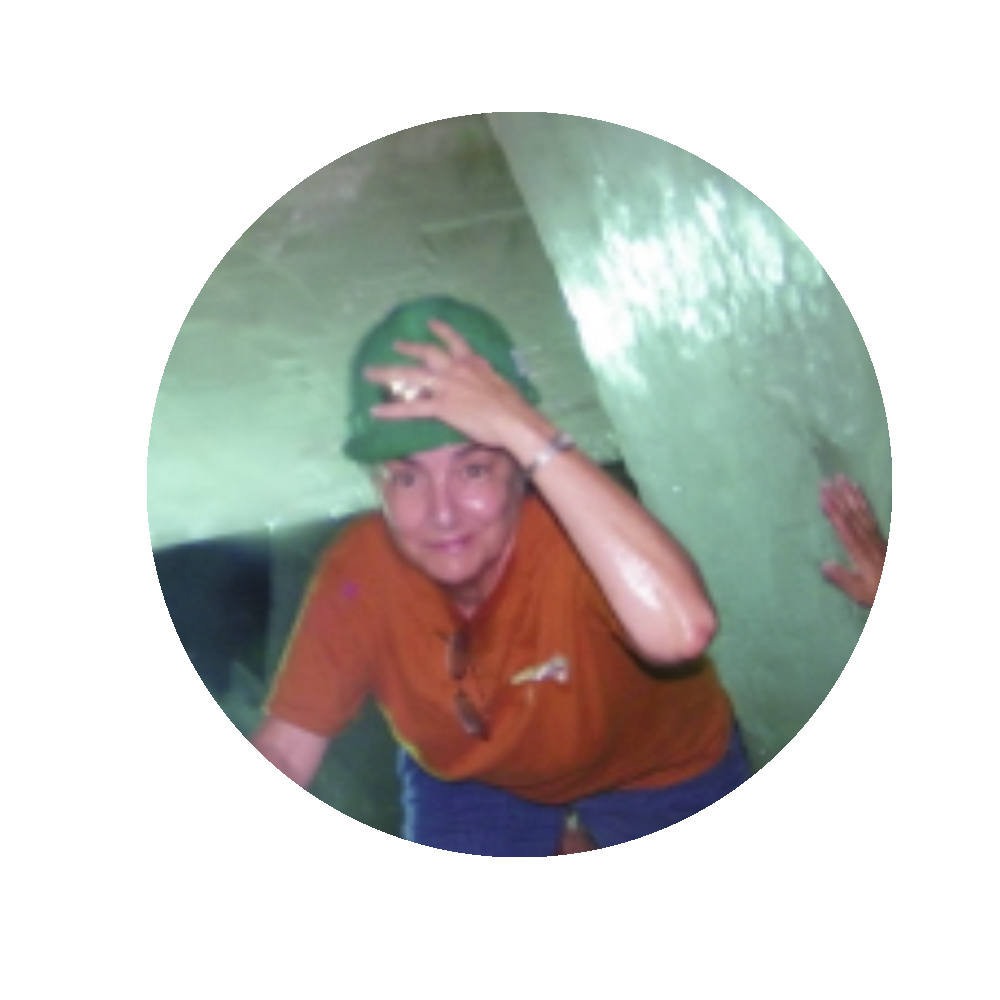 María Elena Montero Cabrera was born in Havana, Cuba, and she is a Mexican citizen by naturalization (2002). She obtained a degree in Physics from the University of Havana, in 1972 and in 1987 she became a Doctor of Physical-Mathematical Sciences in Nuclear Physics and Elementary Particles, at the Joint Institute for Nuclear Research, Dubna, Russia.

She has worked since 1998 at the Advanced Materials Research Center (CIMAV), in Chihuahua, in the Department of Environment and Energy. She is a Senior Researcher “C” at CIMAV and Level II of the National System of Researchers. She is currently conducting research on environmental radioactivity and applications of synchrotron radiation in the study of advanced and environmental materials.

She is the leader of the Environmental Radiological Surveillance Laboratory in CIMAV. From 2012 to 2017 she was the technical manager of the Conacyt Project on the “Influence of the environment on Naica giant crystals”. She has been advisor of 15 undergraduate, 31 master and 15 doctoral theses. She is the author of more than 80 articles in international journals.

She was President of the Cuban Physical Society from 1994 to 1999. She also received the 2012 Chihuahua Award from the Chihuahua’s Institute of Culture, in Technology Area, shared by several professors and researchers from CIMAV and the Autonomous University of Chihuahua. 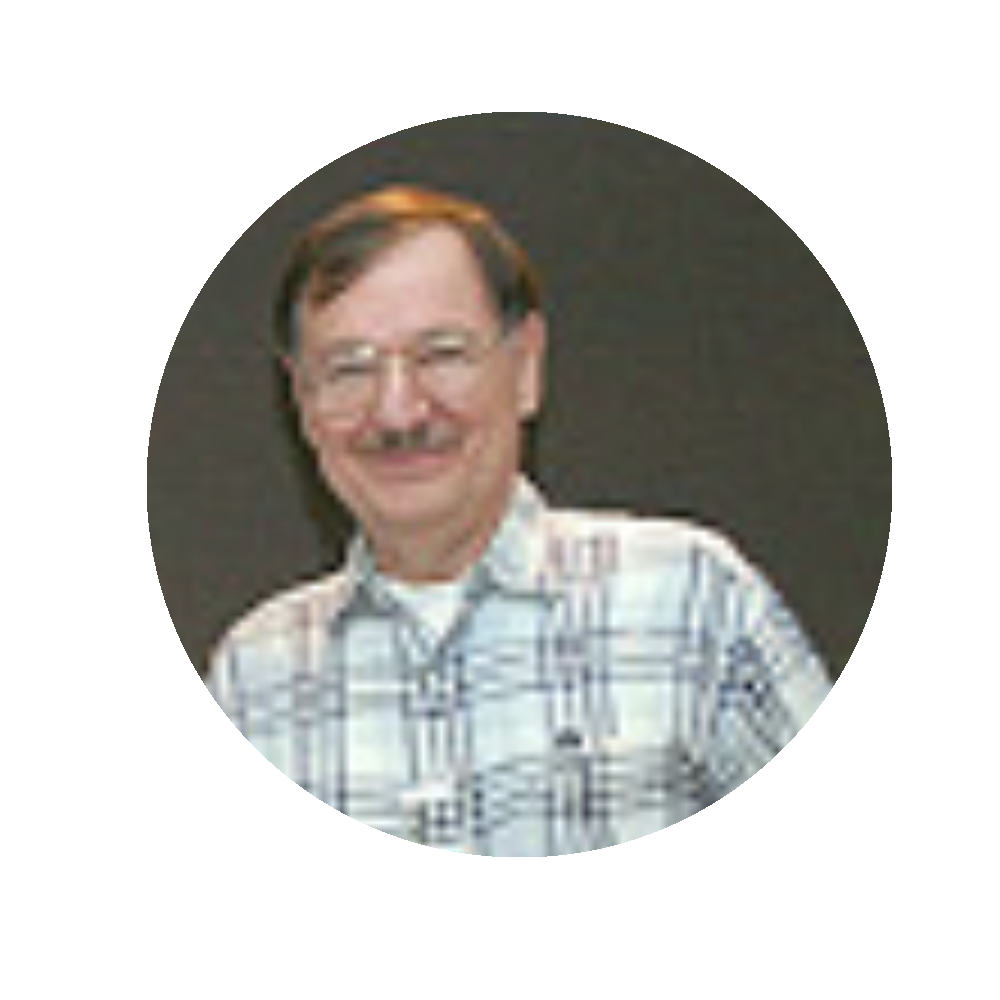 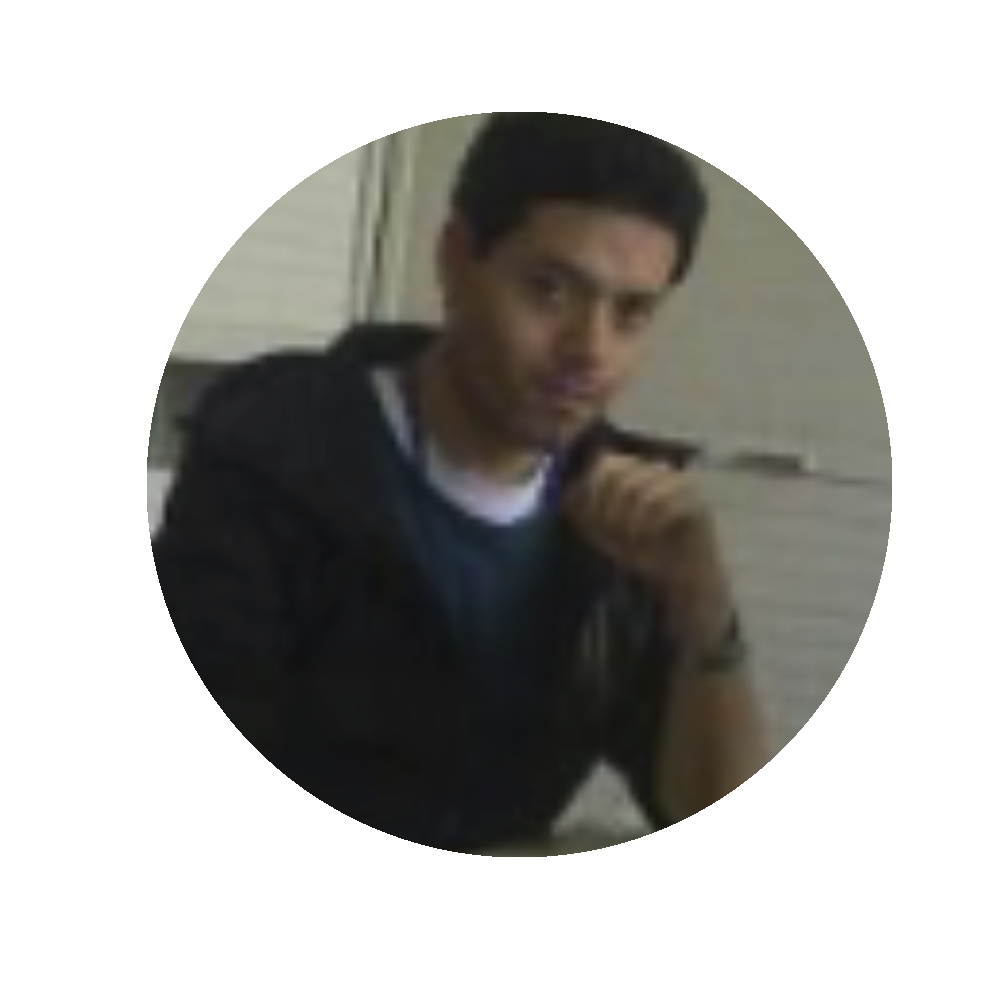 Dr. Rene Loredo Portales has a bachelor degree in Pharmacy, Chemistry and Biology, a Master degree in Chemical sciences in the area of Environmental Geochemistry by the Autonomous University of San Luis Potosí (UASLP), and a PhD in Chemistry by the University of Guanajuato. Actually he works as researcher in the Regional Northwest Station, Geology Institute from the National Autonomous University of México (UNAM). Dr. Loredo is member of the National System of Researchers level 1, and is tutor of the chemistry and biology master degrees’ programs at the UNAM and the biochemistry master degree at the UASLP. Dr. Loredo is actually coordinator of Basic and Applied Science from the Synchrotron Users Thematic Network and as is responsible of the Synchrotron Light Users Division at the Mexican Synchrotron Light Association.

Dr. Loredo, develop research in the biogeochemical dynamics of potentially toxic elements in polluted sites and the chemical speciation and atomic and molecular characterization of metal(loid)s in environmental, synthetic, geologic and cultural heritage materials. In the area of synchrotron radiation, he has done 5 research stays and more than 17 experiments in light sources such as the Elettra Sincrotrone Trieste, Advanced Light Source, European Synchrotron Radiation Facility and Synchrotron-light for Experimental Science and Applications in the Middle East.

Dr. Loredo has published more than 16 scientific research articles in international journals and 1 book chapter. Actually Dr. Loredo teach courses in the areas of Environmental and Earth Sciences and the application of synchrotron radiation in these and other areas.

I NATIONAL AND INTERNATIONAL CONGRESS OF THE SMLS

* Oral presentations’ times have all been covered. The space available for posters is significantly larger.

* The arbitration and publications plan associated with the event is updated as follows:

The acceptance of the received Abstracts, with a view to their presentation as a virtual poster, will be given no later than Friday, June 18. To make the presentation at the Congress, payment of the registration fee is required.

The extended papers (4 – 8 pages) are to be delivered during the Congress. The accepted and presented papers will be published in a Supplement number of the Revista Mexicana de Física

* Papers selected by the Scientific Committee will be considered for evaluation and eventual publication in the Advanced Light Sources section of the RMF.

* Congressional Conferences will be worthy of being seen and heard by a wide audience.

* The possibility of restricted registration, free of payment, opens. People who apply to this variant will be able to see and listen to the lectures, but they will not be able to submit contributions or have access to the workshops. To participate in any way, enter the window “Register Here” and fill in the applicable data as the case may be.